A Kenyan court has ordered a Chinese man convicted of smuggling ivory to pay a 20 million shilling ($233,100) fine or serve seven years in jail in the first sentence handed out since Kenya introduced a tough new anti-poaching law.

Magistrate William Oketch said that Tang Yong Jian, who pleaded guilty to charges of illegal possession and dealing in ivory, could not claim ignorance given the huge publicity surrounding the illicit ivory trade.

Jian, 40, was caught with 3.4kg of raw ivory in Kenya while in transit from Nampula, Mozambique, to Guangzhou in China, where ivory is sold in open markets.

Conservationists hope the tough new wildlife law will deter criminal networks from smuggling ivory out of Kenya’s main Mombasa port and its airports. The east African country has emerged as a major transit route for ivory destined for Asian markets from eastern and central Africa.

“The sentence meted out today … shows wildlife crime will no longer be a lucrative business. The game has changed. It will now be a high-cost, low-benefit venture,” said Paul Udoto, director of communications at the state-run Kenya Wildlife Service.

Conservation groups warn, however, that the ivory trade will remain a multimillion-dollar business until demand for ivory, considered a status symbol among China’s fast-growing middle class, falls.

Kenya, which fears the slaughter of its elephants could harm its tourism industry, passed the new wildlife bill late last year, including stiffer punishments for poachers and wildlife traffickers.

Another Chinese man suspected of trying to smuggle ivory through Kenya’s main airport was arrested on Monday, the Kenya Wildlife Service said. On Sunday local media reported that an endangered rhino was killed and its horn hacked off in a national park on the edge of the capital, Nairobi. It is one of the best-guarded game parks in Kenya.

Rhino horn has a street value of more than $65,000 per kg in Asia, conservation groups say, making it more valuable than platinum, gold or cocaine. ($1 = 85.8000 Kenyan shillings) 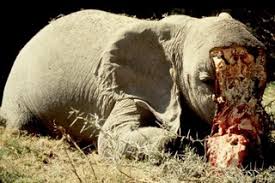