A wildlife conservation organisation kicked out of Hwange National Park has alleged that government bigwigs were involved in the cyanide poisoning of wildlife.

More than 100 elephants have died of cyanide poisoning at Hwange National Park in one of the worst poaching atrocities in Zimbabwe.

John Rodrigues, the Zimbabwe Conservation Task Force (ZCTF) chairperson, said it was shocking that his organisation that had invested more than $1,5 million dollars on conservation of wildlife was now an enemy and denied access to Hwange and other national parks.

“They are afraid we will tell people the truth about the poaching situation and how the elephants were killed,” Rodrigues said, without mentioning names.

“There is a cover-up going on there at Hwange, and bigwigs are involved.

“We have helped in the conservation of wildlife and used more than $1,5million since 2005,” Rodrigues said.

One of ZCTF’s workers was two weeks ago arrested and charged with trespassing after he was found while conducting investigations in the national park by army personnel deployed to secure the area.

ZCTF organisation was set-up in 2001 to assist national parks with anti-poaching operations with regard to wildlife and aquatic life among other objectives.

“This is a big issue that needs the input of many stakeholders; many animals are dying from this cyanide attack, not just elephants,” he said.

“How do we help each other save the animals? Remember these animals do not belong to Zimbabwe but to the people of Zimbabwe.”

The opposition MDC party has demanded a commission of inquiry to probe the killing of elephants at Hwange National Park.

“The MDC’s demands follow the recent unlawful arrests and severe torture of villagers in Tsholotsho and surrounding villages by the police and game rangers and claims by Zanu PF that it is not behind the killings,” said the party’s tourism spokesperson Thamsanqa Mahlangu.

Government has said poaching in national parks has persisted due to lack of resources, calling on business and donors to fund Zimbabwe National Parks and Wildlife Management Authority (Zimparks) to help curb poaching.

Rodrigues said 300 more elephants died in Tsholotso in July and government took six weeks to react to the situation.

He said despite all the challenges Zimparks was facing, the director Maurice Mutsambiwa, wrote to him barring him from all the national parks. 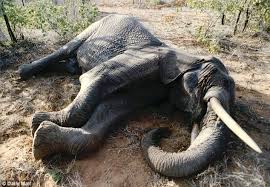 Environmentalist, Animal Lover, Birder,Equastrian
View all posts by narhvalur →
This entry was posted in Animal Abuse and Captivity, Poaching and Wildlife Trafficking, Wildlife and tagged Zimbabwe; Poaching. Bookmark the permalink.