WCS applauds the Parliament’s wide-ranging wildlife crime resolution condemning illegal elephant killing and other illegal trafficking activities Resolution calls on E.U. Member States to introduce moratoria on all trade in ivory products until wild elephant populations are no longer threatened by illegal killing Brussels – 15 January, 2014 – The European Parliament took powerful action against illegal elephant killing through the passage of a groundbreaking resolution on wildlife trafficking that calls for moratoria on ivory trade and other measures against wildlife crime. The resolution expresses the Parliament’s view that wildlife trafficking is a serious economic, national security, and environmental threat. It calls for renewed action by the E.U. Member States to stop the crisis through restrictions on trade and trafficking of illegal wildlife goods. Among these measures is a call for the European Commission to establish an E.U. plan of action against the illegal wildlife trade and recommends enhanced measures for the prosecution of perpetrators of wildlife crime and on-the-ground protection for elephants, rhinos, tigers and other species. The resolution’s introduction was led by M.E.P. Gerban-Jan Gerbrandy and passed through the Parliament’s Committee on the Environment, Public Health and Food Safety (ENVI) in November. Notably, the resolution references the statement of 11 African elephant range states at the September meeting of the Clinton Global Initiative, a gathering of global leaders aimed at addressing the world’s most pressing challenges, which urged countries to declare national moratoria on any trade in ivory because of the crisis. In that vein, the resolution calls on E.U. Member States to introduce their own moratoria on all commercial imports, exports and domestic sales and purchases of tusks and ivory products until wild elephant populations are no longer threatened by illegal killing. “I am very glad the European Parliament fully supports me in this important challenge,” said M.E.P. Gerban-Jan Gerbrandy. “I want poaching to be seen as organized crime. That involves higher penalties, higher priority and specialist investigators. We must avoid the extinction of the most iconic animals that roam on earth. Europe cannot lag behind anymore. We have to stand up against illegal poaching.” “This landmark resolution passed by the European Parliament shows the rising amount of global concern for the toll that the ivory trade is taking on wild populations of elephants,” said John Calvelli, WCS Executive Vice President of Public Affairs. “Without a moratorium on all ivory sales, there will always be a way for traffickers to continue this illicit trade. In order to protect elephants on the ground, we must take steps to cut off the market for these products. It is time to close domestic ivory markets.” Momentum in Europe continues next month with a London summit on illegal wildlife trade hosted by Prime Minister David Cameron that will attract wildlife experts and heads of state from around the globe. African elephants are being lost at an unprecedented rate and the demand for ivory shows no decline. Approximately 35,000 elephants were killed by poachers last year – some 96 elephants each day. In response, WCS recently launched 96 Elephants , a public outreach campaign aiming to bolster support for elephant protection elephant protection by calling for additional funding to address the poaching and trade, for a moratorium on US domestic ivory sales, and to educate the public about ivory trade and consumption. WCS is also part of the Clinton Global Initiative commitment to end the elephant poaching crisis. “We congratulate the European Parliament for taking this major step,” said Calvelli. “WCS hopes that the European Commission and E.U. Member States will now take the appropriate action needed to make these moratoria in Europe a reality. We would also like to see this resolution serve as impetus for similar action in the United States Congress.” To end the elephant poaching crisis, WCS advocates a three-pronged approach: stop the killing, stop the trafficking, stop the demand. More can be done domestically to stop trafficking, including instituting moratoria on all ivory sales within the U.S., E.U. Member States, and other ivory consumer countries as elephant range states have expressed at the Clinton Global Initiative. 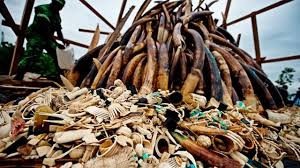 Environmentalist, Animal Lover, Birder,Equastrian
View all posts by narhvalur →
This entry was posted in Poaching and Wildlife Trafficking and tagged EU Commission; Taking Stand Against Wildlife Crime. Bookmark the permalink.