Pet food maker Royal Canin has been strongly criticised by horrified animal rights campaigners after it emerged that it had been sponsoring a bear-baiting contest in Ukraine.

Animal welfare charity Four Paws has video of the contest – and of the trophies branded with the logo of Royal Canin, a subsidiary of multinational food maker Mars.

The video made by the charity shows a brown bear, clearly in distress, tethered by a chain while it is attacked by several dogs as several people watch. Three men pull on the chain to bring the bear back toward the dogs when it tries to get away.

The baiting of the bear continues for several hours, as dogs are set on it at 10 minute intervals. The charity said bears are often dehydrated and underfed, to make them weaker opponents for the dogs.

The bears’ claws are nearly always removed and, because they are chained up, they can put up little defence against the dogs.

Four Paws said the video, which also shows Royal Canin branding on a tablecloth, banner and tape, was filmed in Vinnytsia in April this year. The Royal Canin trophies are awarded to the owners of the most aggressive dogs.

The contests are part of training camps for hunting dogs, which happen about six times a year. The charity said it had evidence that Royal Canin had sponsored several of the events recently, and that it had been shown material indicating the pet food manufacturer also sponsored a contest in February 2012.

“By sponsoring appalling bear-baiting, it is reducing wild animals like the bear to the rank of second-class animals.”

There are believed to be up to 20 baiting bears in the Ukraine. The charity said they were taken from their mothers at just a few months old, then kept in tiny cages with no bedding, just a concrete floor.

They are only released from the cages for training or to be attacked by hunting dogs.

Royal Canin, a French pet food manufacturer, was bought by Mars in 2001. The company has apologised for its actions: “Royal Canin has been absolutely horrified to see these images linked with our brand. The sponsorship of this event is not consistent with Royal Canin’s animal welfare policy.

“This has been a humbling experience for Royal Canin. We thank Four Paws for bringing this practice to our attention … Royal Canin will work to improve the welfare of the Ukrainian bears and dogs involved in bear baiting.”

The company said it had ceased sponsoring the event immediately and would meet with Four Paws next week. The charity hopes to build a bear refuge in Ukraine, for which it said it needed the support of Ukrainian authorities, and of the pet food giant. 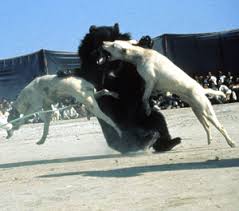